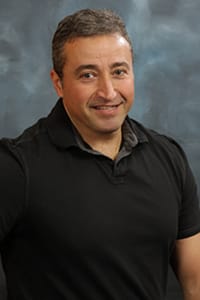 “Dr. Harry” J. Tsotsos is a Long Island native. While he was raised in Merrick and graduated from John F. Kennedy High School in Bellmore in 1982, Dr. Harry has been a part of the Wantagh community his entire life, often working long hours in the Circle M Diner as a child, which is still owned by his family.

Harry received his Bachelor of Science in biology from SUNY Stony Brook in 1986 and completed his dental education at Tufts University’s School of Dental Medicine in 1990.

Dr. Tsotsos spent the next year in private practice, practicing general dentistry in Sheepshead Bay, Brooklyn, before completing his two-year Post-Graduate studies at NYU, earning his certificate in Orthodontics in 1993.

After graduation, he immediately began in private practice with Dr. Richard Thall in July, and then formed a partnership in June of 1994. Drs. Thall and Tsotsos practiced together until June 1998 when Dr. Thall retired. Dr. Tsotsos then started with Woodbury Pediatric Dentistry and Orthodontics.

Dr. Harry has been Invisalign certified since 2000. Dr. Harry Tsotsos has been married to Dr. Deborah Messina Tsotsos since May 1993, a pediatrician in Mineola, NY. Together, they have three children, John, Kylie, and Luke.